So, we changed our format a little bit. It is more in tune with the original idea of our little video podcast. The original idea was to record our daily coffee conversations, which often end up around pharmacy and healthcare (hey, not a big surprise for 2 pharmacists), so we decided to be true to our original idea. We each choose an interesting topic that we ran into in the news, or elsewhere.

Lastly, help us out and SUBSCRIBE to our Youtube channel, as well as, let your friends know about our project. It’s fun project for us, and we hope others find value in it as well.Here is the most recent episode. Check it out. Enjoy

Sam Parr is the CEO and co-founder of TheHustle.co, daily business email newsletter with over 1 million subscribers that will keep you coming back for more. He also started Trends.co and Hustlecon.com. We spent some time with Sam chatting about pharmacy and trends in digital health.

Burnout is real. What next? Interview with Alex Barker PharmD (HappyPharmD) – DrugsandCoffee ep005

Alex Barker PharmD is an author, speaker and founder of The Happy PharmD. He has specialized in helping pharmacist find fulfilling jobs or start their own business. He has spoken with over 1000 pharmacists and he is very familiar with the challenges a lot of pharmacists are facing these days.

Hear what he has to say about the future of pharmacy profession, as well as what advice he has for the pharmacist struggling with their current jobs.

You can find more information about Alex and the services he provides on:

Joann Tweh PharmD, drugsandcoffee co-founder and co-host, shares how she used her clinical knowledge to help her own mother. Learn how she quickly recognized rare Stevens-Johnson syndrome (on 3 separate occasions), and how she helped her mother navigate health care system when she was diagnosed with brain tumor.

All of these examples highlight importance of acting as a patient advocate. Small acts of support can have very significant impact. 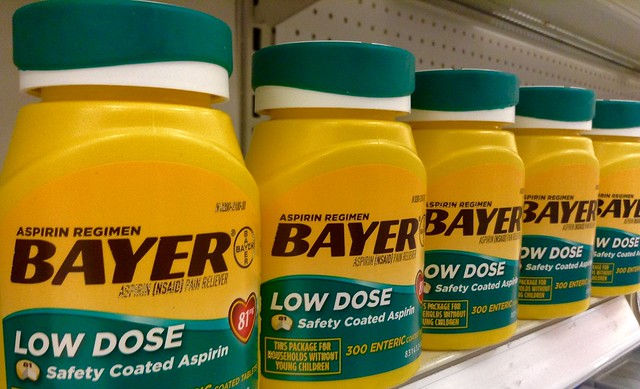 Introduced to market in 1899 by Bayer, Aspirin (acetylsalicylic acid) remains one of the most widely sold medications on the planet. In the beginning, it was mostly used as a painkiller, but that started to change in the late 1980s and early 1990s. Researchers started looking into anti-platelet properties of aspirin, and quickly realized that aspirin may provide some protection from primary (in patients that never had any cardiac events like heart attach etc) and secondary cardiac events (in patients with history of cardiac events).

Up to that point, Aspirin was widely available in the form of a 325mg tablet, but the initial studies opted for lower dosing (in order to minimize GI side effects). First studies looked at 325mg every other day. With some quick 3rd grade math, we get a dose of 162.5mg per day.

Eventually, decision was made to settle on 1/4 dose of the original 325mg tablet for US market. It was nicknamed, “Baby aspirin” (unfortunate name given that it is not recommended for babies due to risk for Reye’s syndrome).

When we asked Bayer for comment, they replied: “Our 81mg aspirin is intentionally formulated to be ¼ the strength of an original strength aspirin.” 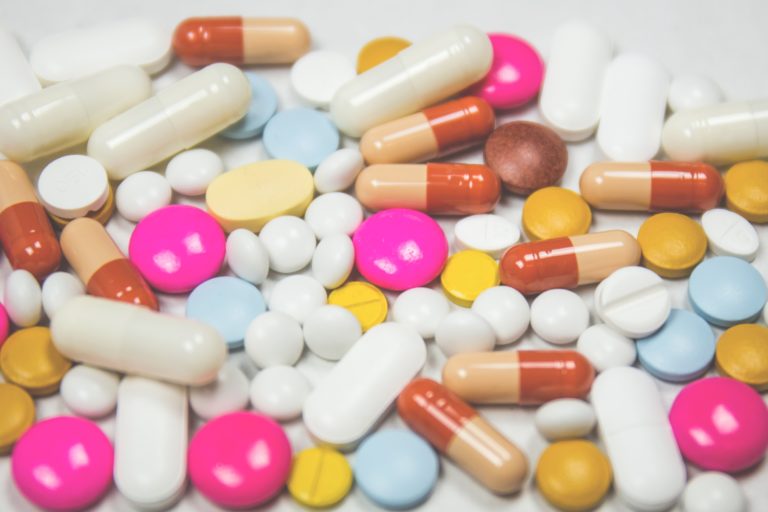 Stevens-Johnson syndrome (SJS) and Toxic epidermal necrolysis (TEN) are life threatening reactions to medications that can occur. These reactions are characterized by widespread skin necrosis resulting in skin detachment. While these reactions can occur after initial drug intake, they can also happen following many years of taking the medication. The tell tale signs of SJS and TEN are a purple colored rash that appears in the genital, ocular and orbital areas on the body.

Stevens-Johnson Syndrome and TEN differ in the severity of the disease. SJS results in less than 10% of skin detachment where TENS results greater than 30% of the skin detachment. (see reference 1 below) The danger in this syndrome lies in the complications that follow the attack. The destruction of of our first line of defense our skin, leaves patients susceptible and vulnerable to infection.

As pharmacists we are often shown many rashes by our patients. As accessible health care providers it is important that we are knowledgeable about this deadly rash. It may appear darker purple on people with more melanin in the skin. It is important that we ask the presenting patients further questions and warn patients to seek medical attention if the situations warrants this.

My first encounter with SJS occurred during my studies in pharmacy school. My class at school was shown images of SJS and TEN. Following class, my mother called and reported a rash on her body. As she described the purplish rash on her genital area and on legs and thighs I was frightened. I advised her to seek medical help at a hospital where she was diagnosed with SJS. She was reacting to Zocor, a drug which she had been taking for several years.

My second experience occurred 4 years later when my mother was being cared for post-op brain surgery at a medical facility in Durham NC. During my visit, I noticed a purplish rash on her ears. Upon quick examination I found the rash was also present in her genital area. At this point I was a licensed pharmacist and so I examined what drugs she had been given. In spite of her reported history of SJS with Zocor, my mother had been given Zocor. I immediately reported this to a reluctant physician who later treated her for SJS.

My final experience with SJS occurred while at work. An African American woman sought consultation for a dark purple rash on her hands. None of her medication was new. I asked her to examine her body and look for signs of this rash in other areas. She returned shortly after this from bathroom after she found the rash in her genital area. I advised her to seek immediate further medical attention. While I do not know the outcome of her hospital visit, I believe further medical examination with warranted.

We had a pleasure to chat with Flaviu Simihaian, CEO of Troy Medicare, new Medicare Advantage plan founded and backed by pharmacist and many other healthcare professionals. Flaviu shares his vision for more meaningful and effective healthcare model, and explains how will Troy Medicare partner with local independent pharmacies and small chains to provide excellent clinical services to its members.

Matt Maughan PharmD has a unique career story that led him from Utah to Philadelphia PA, Charleston SC, Cleveland, OH, then all the way to Middle East (Qatar), and back to New Hampshire. He has extensive hospital management experience as a manager and director of pharmacy with significant focus on patient safety and general pharmacy operation.

His latest job at Dartmouth-Hitchcock Medical Center as Director of Telepharmacy gave him an opportunity to explore telepharmacy and all the benefits of using power of internet and computer technology to help patients and fellow medical professionals.

Find out about his journey from pharmacy school to residency and landing various hospital management jobs. He shares all the good and bad, and it is definitely an hour packed of great information for future and current pharmacist.

We also discuss future of pharmacy in the digital world. Hear from Matt how he thinks pharmacy will look in the next decade. 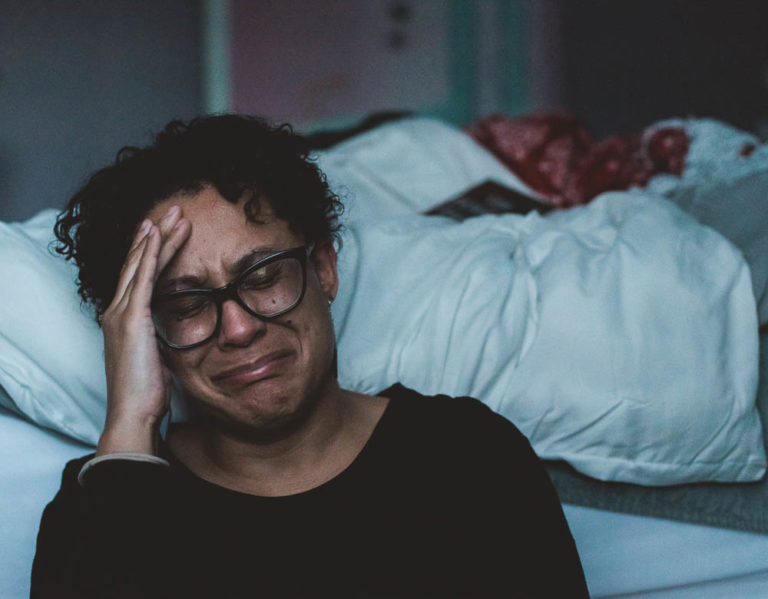 On March 19th 2019 FDA announced approval of the very first treatment targeting postpartum depression (PPD). Given that PPD is not that uncommon, or unknown, it might have come to you as a surprise that this is the FIRST treatment specifically tailored for PPD. Almost 1 in 9 women experience some form of PPD, and many more suffer in silence.

How does it work?

The proposed mechanism for Zulresso (brexanolone) is very interesting. Allopregnanolone levels (progesterone metabolite) rise together with progesterone during pregnancy. Given that allopregnanolone is a positive modulator of GABA receptor, the effects of this chemical are quite pleasant for the expecting mother. The trouble happens about a month before due date. The levels of allopregnanolone start dropping, leaving the mother with some unhappy GABA receptors. Depression slowly sets in. Baby is born. Sleepless nights and society induced stress push already vulnerable mother over the edge and…..postpartum depression is born.

In order to correct this Allopregnanolone depletion, the most reasonable thing would be to replace lost Allopregnanolone. The issue is poor oral bioavailability, so IV route was chosen. In order to effectively administer this medication proprietary compound brexanolone was developed. This is the proposed mechanism. Research around PPD continues.

Anything special I need to know?

Zulresso is very unique in respect to administration and monitoring.

BLACK BOX WARNING: Excessive sedation
Method of administration and dosing: Continuous IV infusion over 60 hours. Dose tapers up and down throughout the 60hr infusion.
Availability: Only available trough REMS program. Administered in certified healthcare facilities under supervision of a qualified healthcare provider.
Efficacy: Effects are seen almost immediately, with peak efficacy occurring after about 2 days. Effects of the treatment have persisted up to 30 days. The effects may be longer.
Side effects: excessive sedation, dry mouth, hot flashes
Contraindication: none
Price: $34,000 per treatment. High price may not allow many mothers access to this treatment.

We discussed her push for collaborative care and her vision for the future of clinical pharmacy. She described her journey from Kenya to Charlotte NC, and the reasons for opening her first pharmacy, as well as, the reasons for establishing successful collaboration with multiple local primary care providers.

Her team of clinical pharmacists are currently working hand in hand with many physicians and they are rapidly expanding to many clinics around NC. She also spends time teaching her method at Avant Institute.

You can find more information about Amina at:

How pharmacists partner with providers and get paid – Amina Abubakar...

Autoimmune syndrome and miscarriages? Can blindness protect from schizophrenia? – ep007...

Interviews with healthcare leaders and innovators, as well as short-form articles and resources on various pharmacy and general health topics.